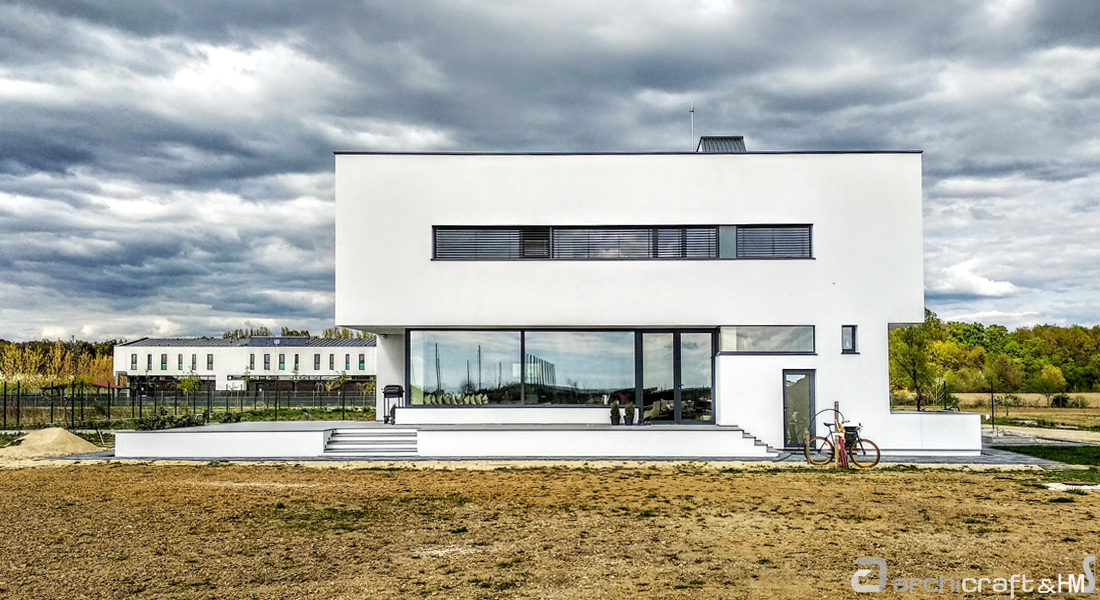 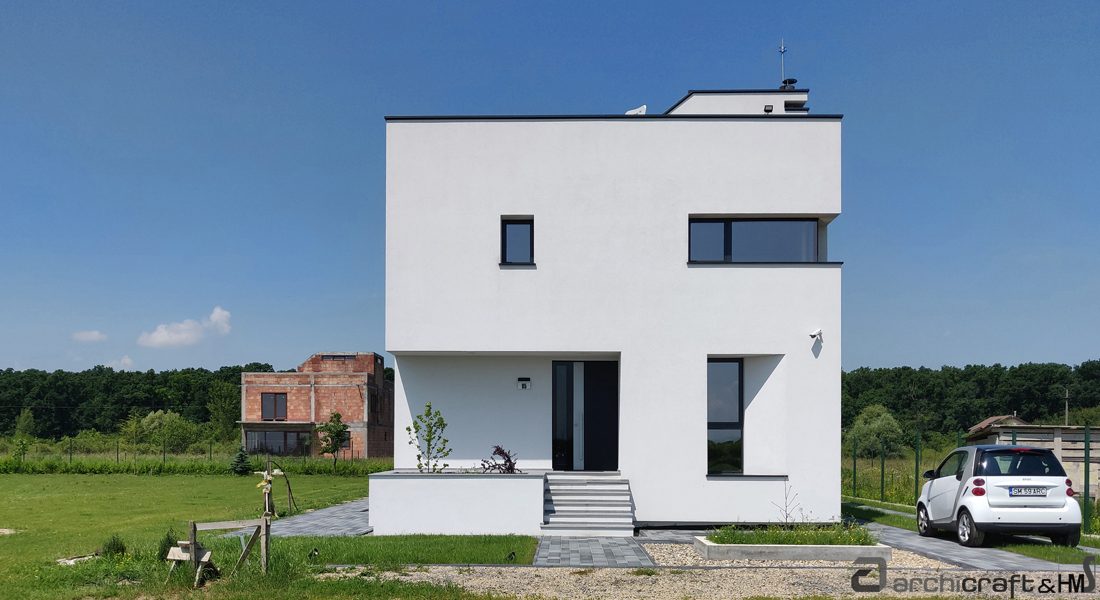 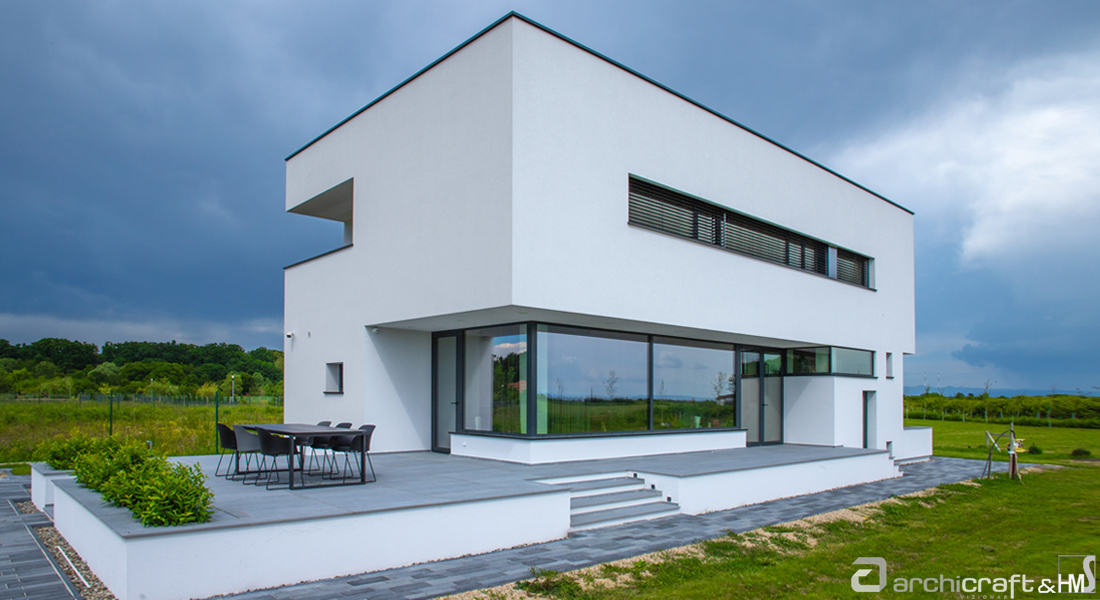 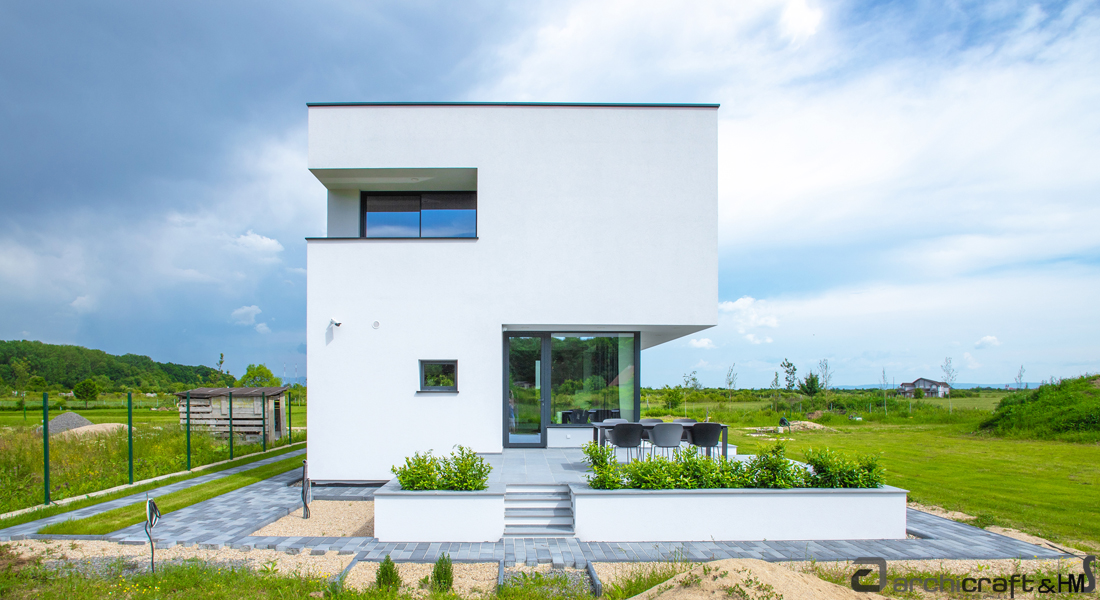 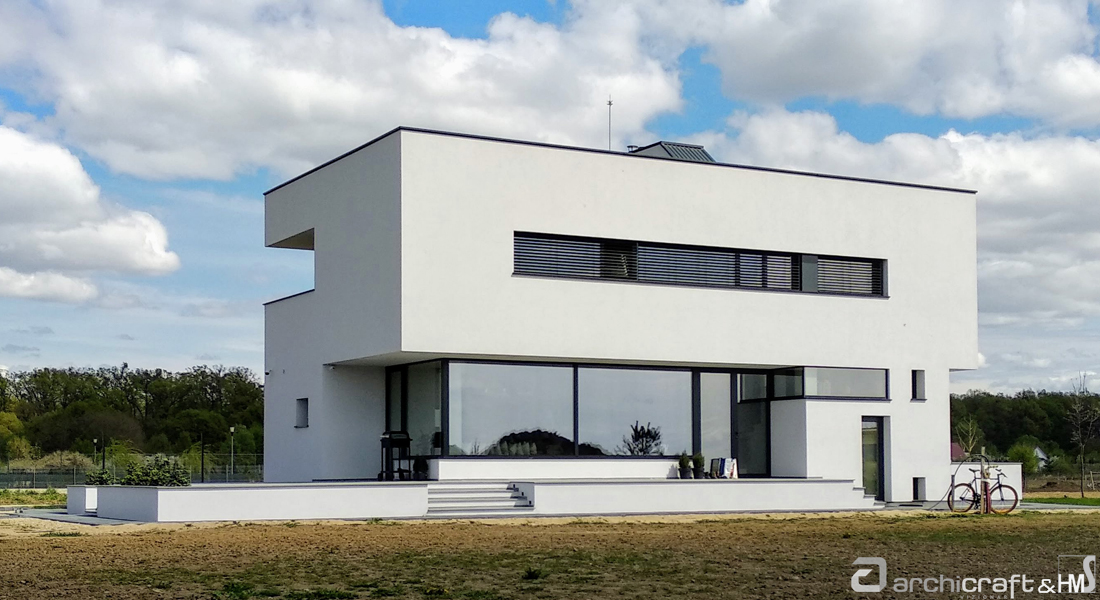 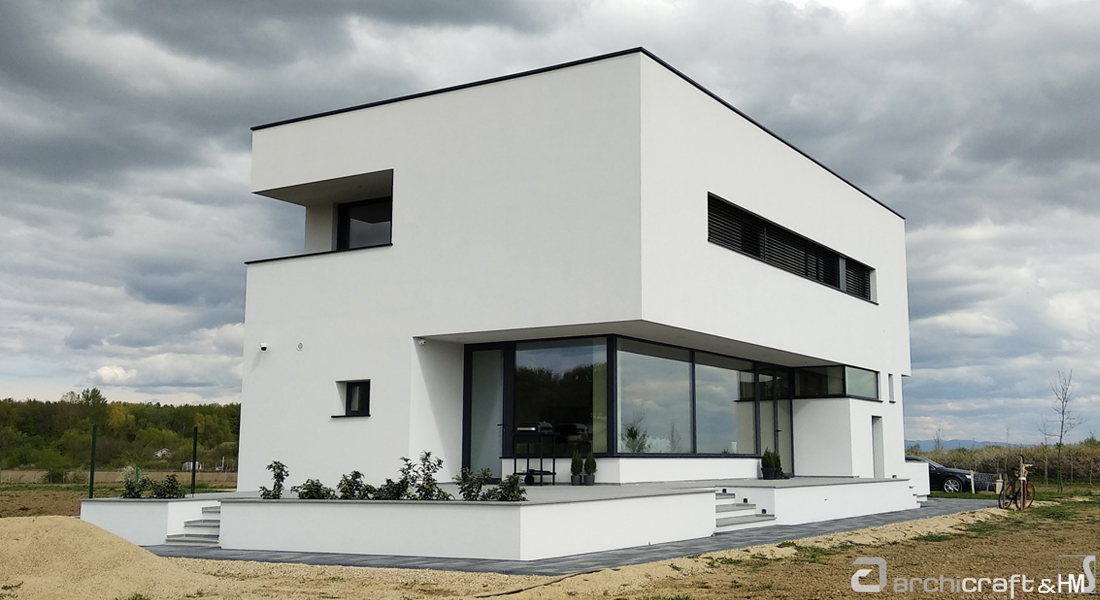 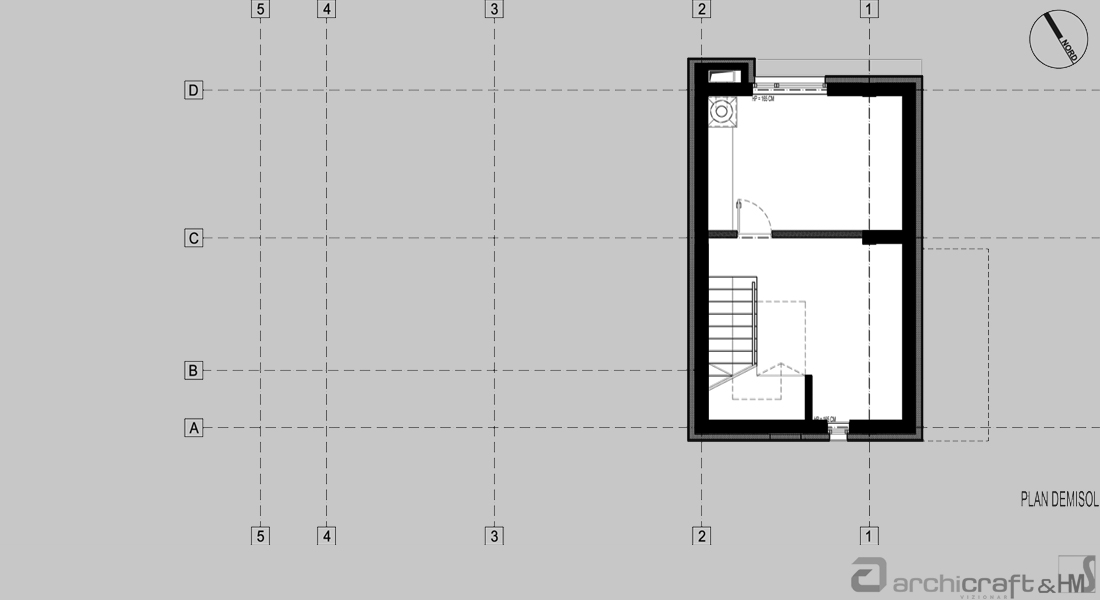 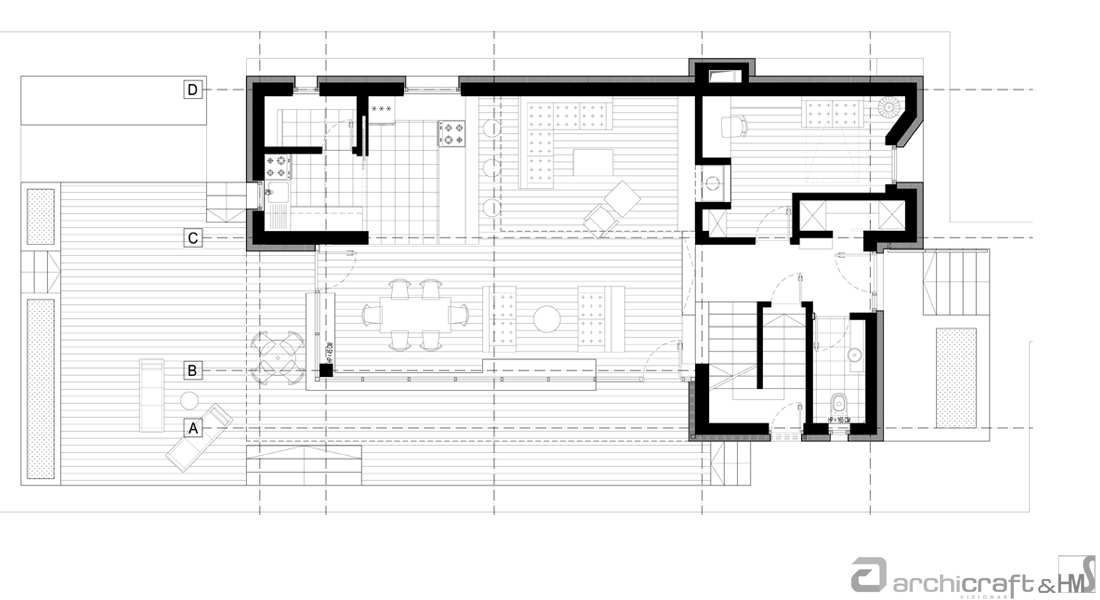 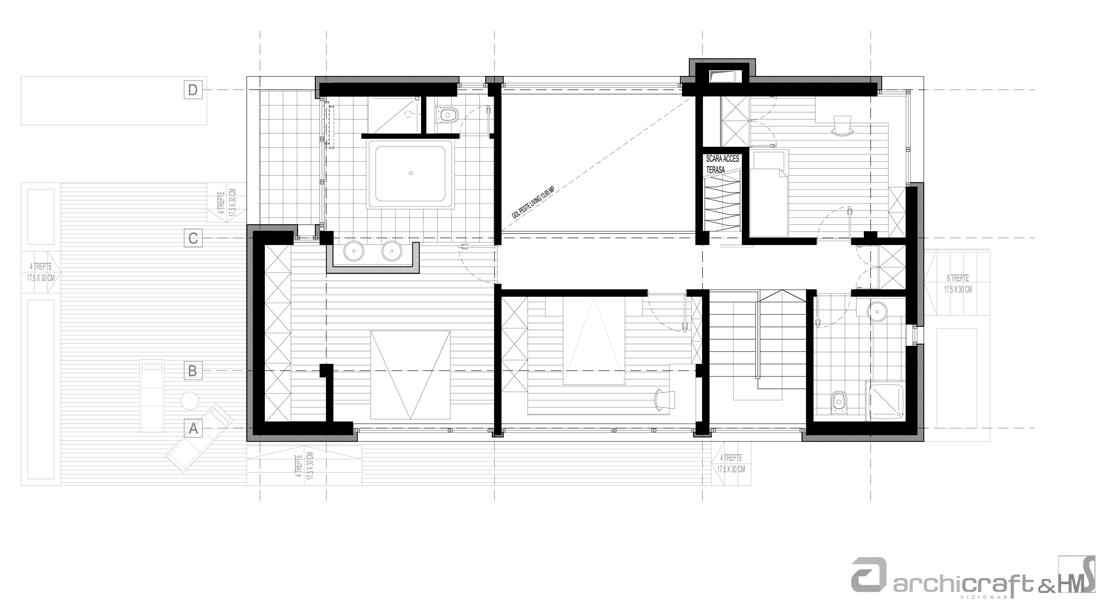 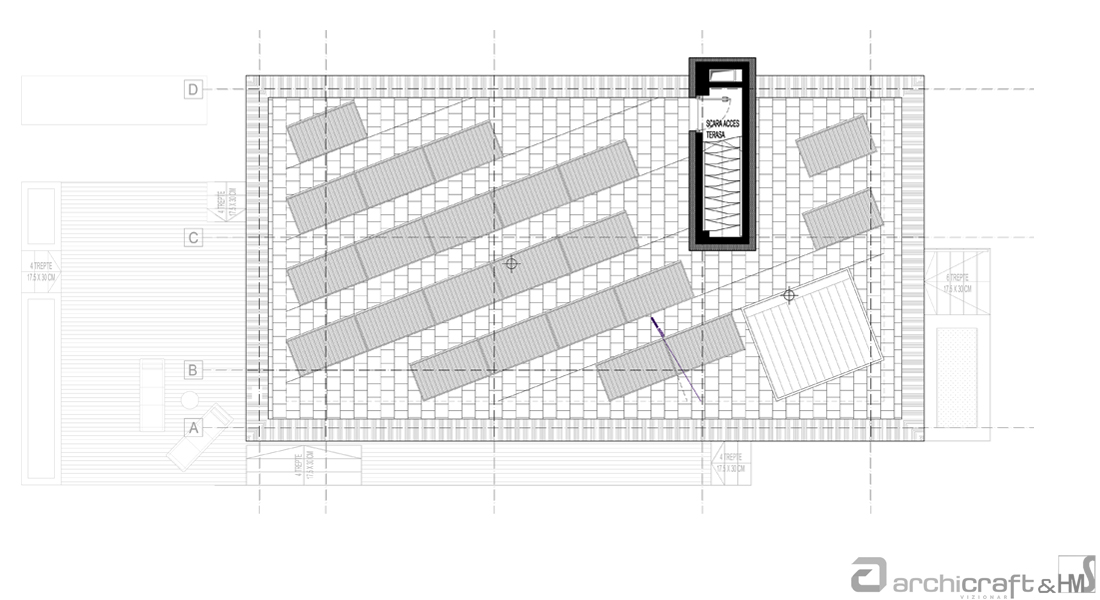 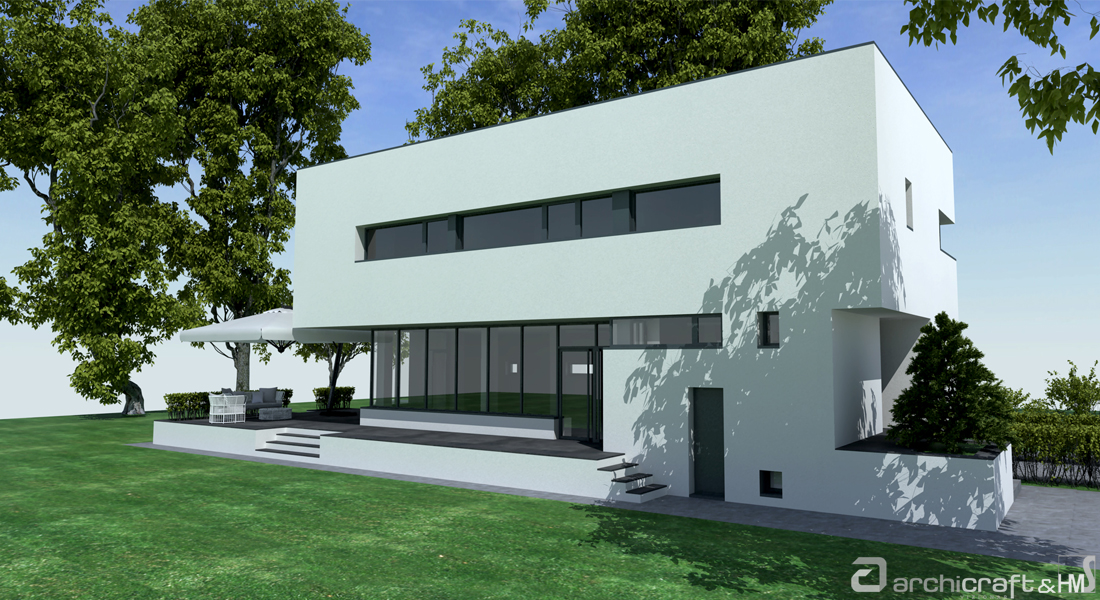 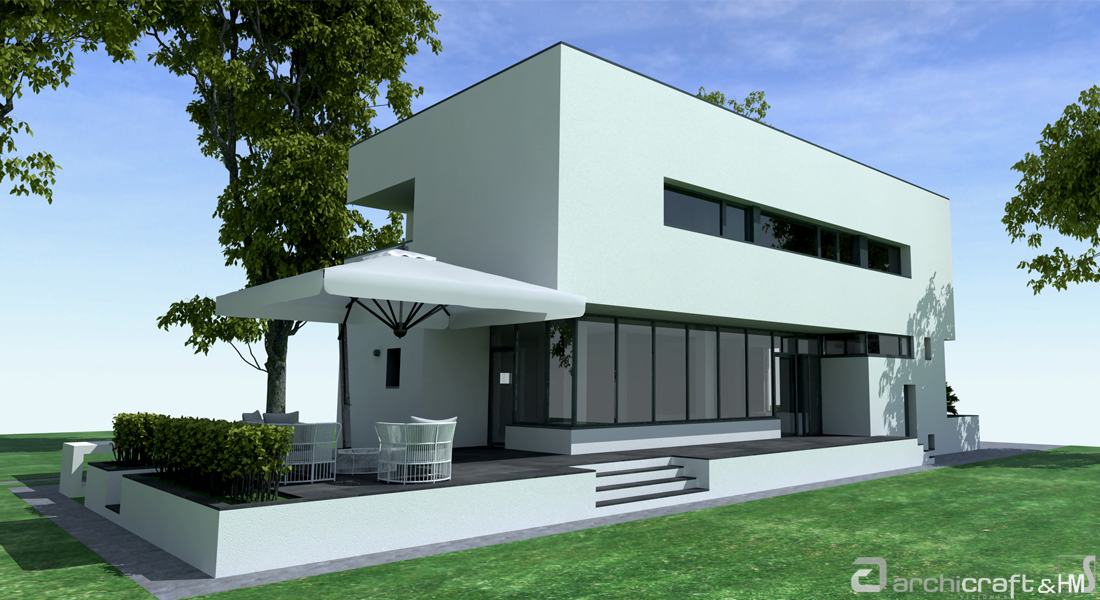 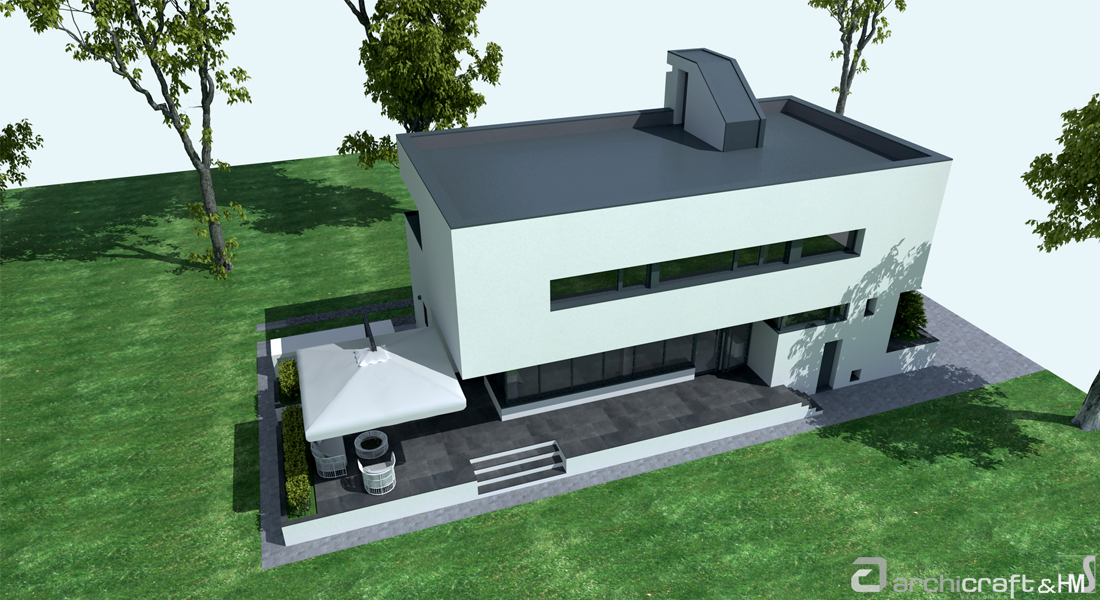 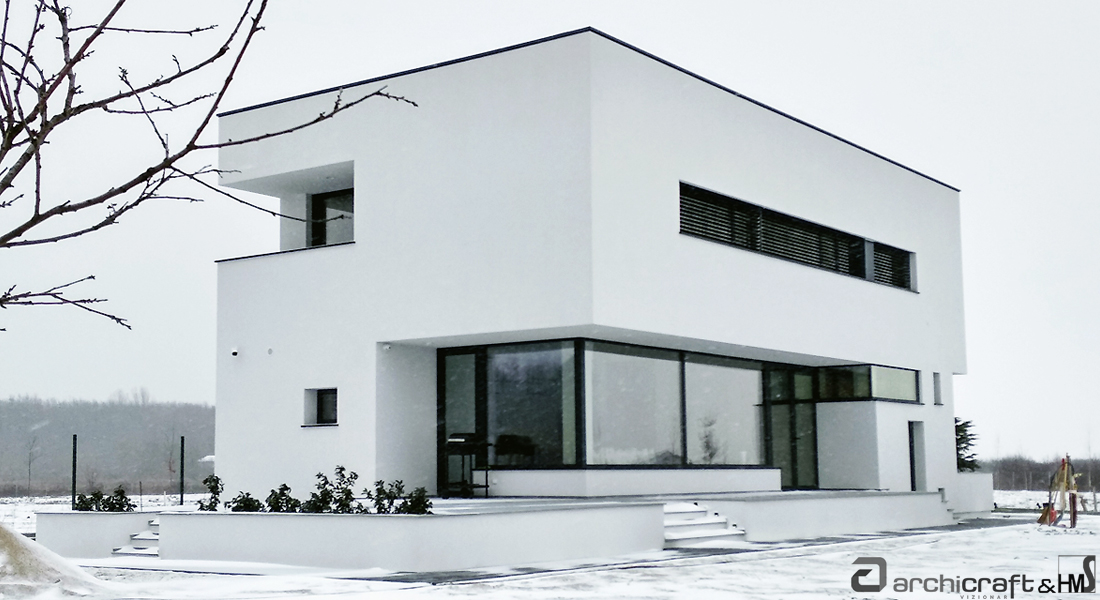 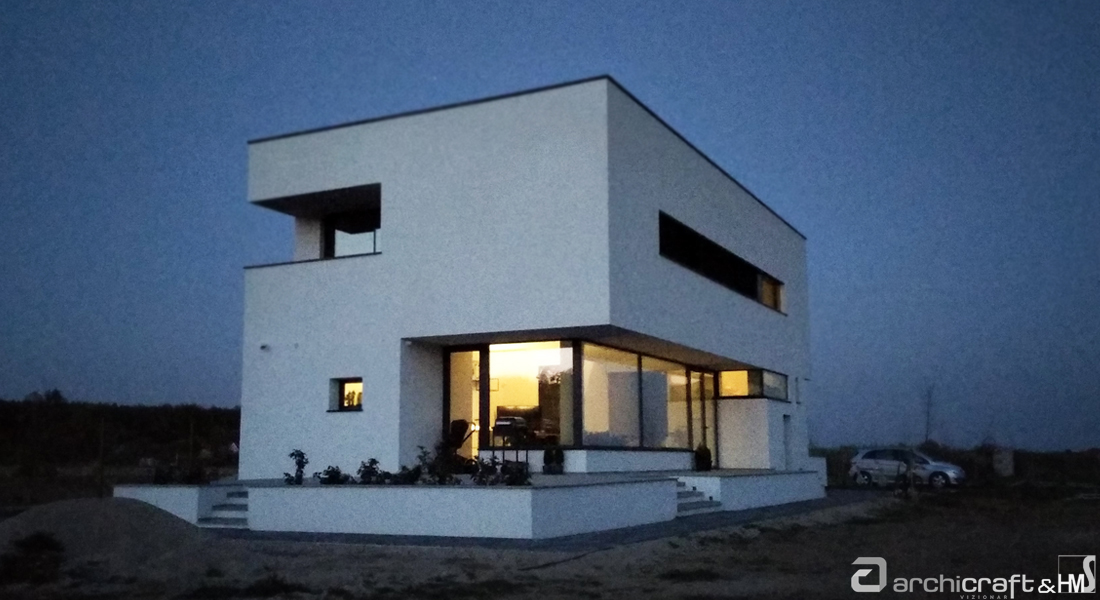 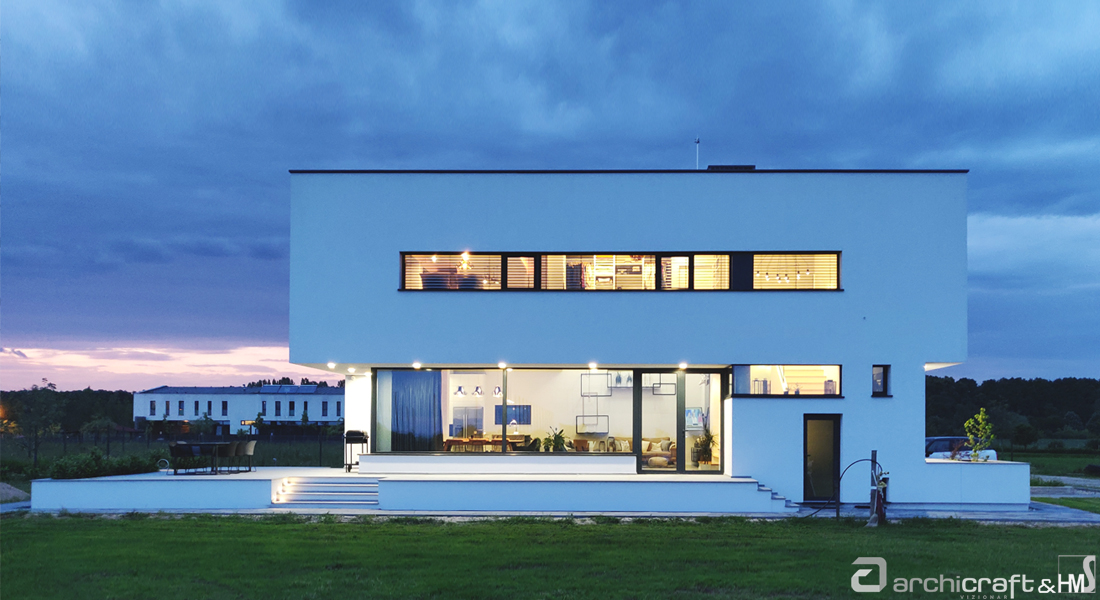 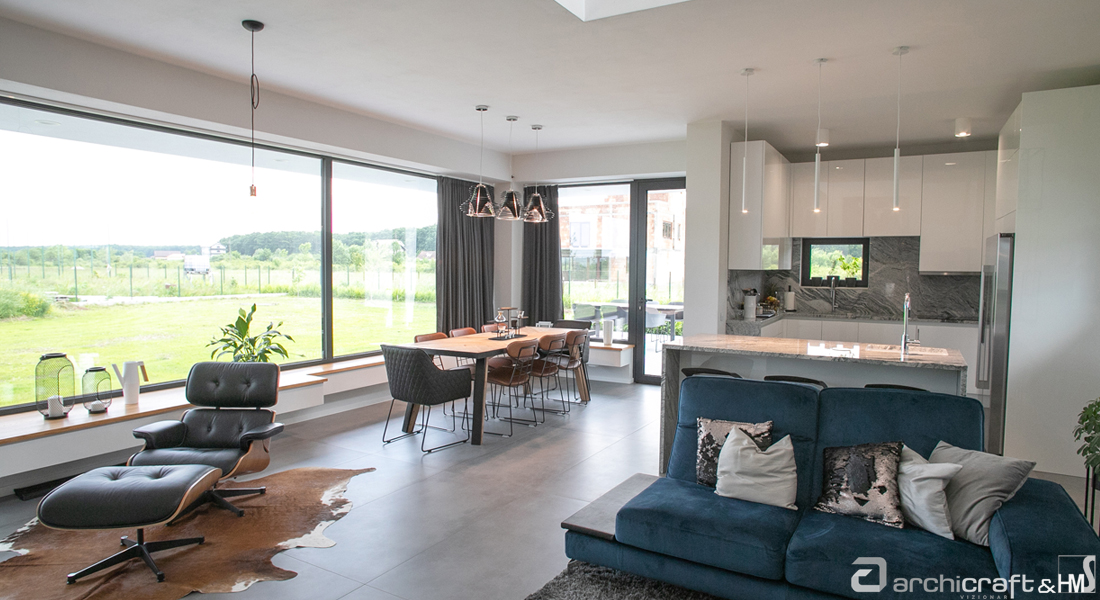 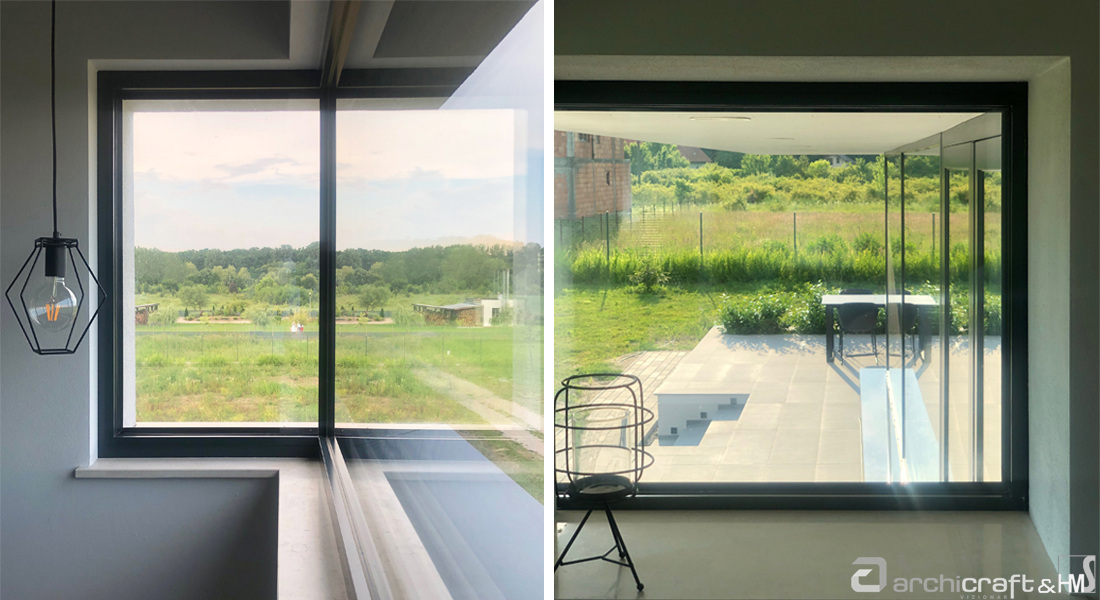 Satu Mare. A city that up until recently was renowned for its “garden city” typology, preserved in its central and northern area. Hope of picturesque-looking areas right in the city, even in the case of trivial streets. But the last few years have recorded an increased “low-rise high density” process of densification of the urban tissue, with the obvious cost of alteration, and in some areas, of the definitive loss of the intertwining image of city and nature.

As a response, both a segment of the market, represented by some developers and the City Hall, have worked towards setting up new peripheral areas of the city, so that they would be developed according to the garden-city typology.

The present dwelling was tailored for such a site, on a new plot, in the vicinity of the Noroieni forest.

The concept proposes to find a sufficient architectural act for the integration and valorisation of nature – framework. Behind a reserved street façade, a compact white prismatic volume is carved on the directions of the valuable visual relations with the private courtyard, the neighboring forest and the skyline towards the city. This creates bold glazed openings and a generous semi-covered terrace towards the southwest. However, the gaps were designed to satisfy, in addition to the optimum natural illumination of each type of interior space, especially a level of increased sun protection for a judicious energy approach.

The interior-exterior visual relations thus lead to a dialogue of contexts in which the dwelling is hosted by nature, and the nature rebecomes part of the dwelling.

The way to set up the defining link between the living area and the private courtyard was to withdraw the south-south-western-glazed plans so that the upper level overhanging volume would ensure the effective shading of the living area during summer and allow solar intake during the cold season.

Other systems and technologies implemented to ensure an increased level of energy independence are the Canadian well (natural ventilation with pre-heating during winter and pre-cooling during summer), thermal power plant with geothermal pumps and a network of photovoltaic panels on the terraced roof of the house. 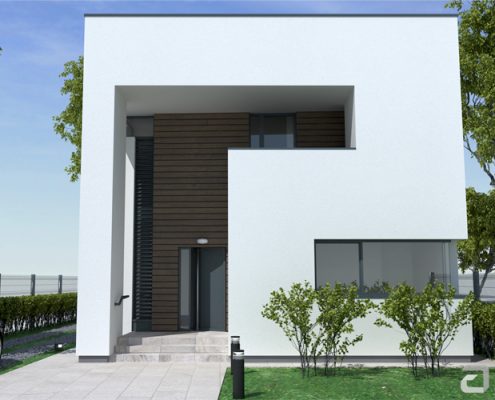 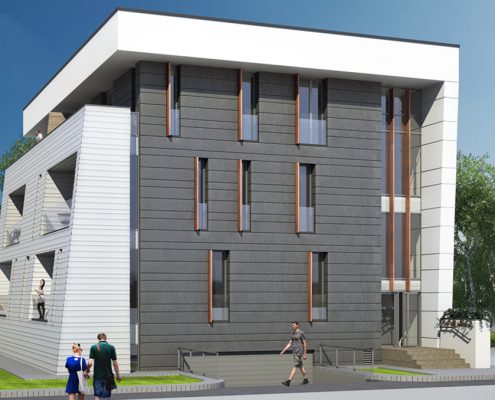 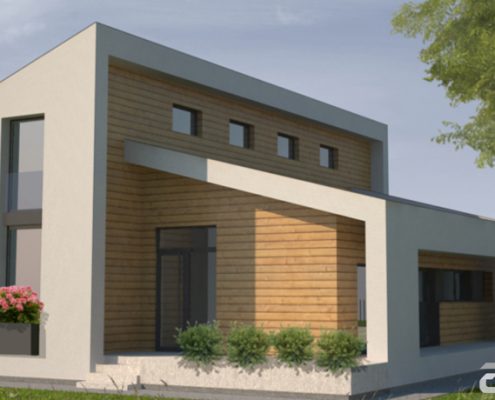 can you do something on a 6m wide plot?